THIS Faculty / School HAS
1 GUIDE

Pepperdine University is a private research university affiliated with the Churches of Christ and has its main campus near Malibu, California. Founded by entrepreneur George Pepperdine in South Los Angeles in 1937, the school expanded to Malibu in 1972. Courses are now taught at a main Malibu campus, six graduate campuses in southern California, a center in Washington, DC, and at international campuses in Argentina, China, England, Germany, Italy, and Switzerland.

The university is composed of one undergraduate (Seaver College) and four graduate schools: the School of Law, the Graduate School of Education and Psychology, the Graziadio Business School, and the School of Public Policy. Pepperdine's Malibu campus is situated on 830 acres (340 ha) of the Santa Monica Mountains overlooking the Pacific Ocean and the Pacific Coast Highway in Malibu, California. It is widely considered one of the most beautiful college campuses in the world in terms of scenery and architecture, and has been described as "a place that looks more like a beach resort than a private university. The campus offers views of the Santa Monica Bay, Catalina Island, the Palos Verdes Peninsula, and much of the westside of Los Angeles. Most buildings are designed in the Mediterranean Revival Style with white stucco walls, red tile roofs, and large tinted windows. The first round of construction on the site was completed in 1973. The most distinctive feature of the Malibu campus, apart from its location, is the Phillips Theme Tower, a 125-foot obelisk with an embedded cross that stands on the front lawn. The tower was designed by William Pereira in 1972, and construction was completed in 1973. The tower was dedicated in 1974 as a symbol of Pepperdine's dedication to its Christian mission. Following disputes with Malibu residents over the lighting of the cross, the tower has not been illuminated since 1980. Alumni Park is located on the lowest part of the Malibu campus, adjacent to the Pacific Coast Highway. It is a 30-acre expanse of lawns, trails, hills, ponds and coral trees overlooking the Pacific Ocean. Landscape architects Eric Armstrong and S. Lee Scharfman were responsible for the campus green space planning and design. The park was dedicated in 1979, and it now serves as the location for the university's commencement exercises. Overlooking Alumni Park is Stauffer Chapel, with its 3,000 square feet of stained-glass windows designed by Robert and Bette Donovan and constructed in 1973. The main academic plaza for the undergraduate programs of Seaver College lies on a knoll above Alumni Park and includes Tyler Campus Center, Payson Library, and the Weisman Museum of Art. Undergraduate housing and athletic facilities sit to the northwest of the academic complex. The School of Law is situated on a hill above these areas. Banowsky Boulevard separates Alumni Park from the main academic complex and is named in honor of William S. Banowsky, the fourth president of Pepperdine. Spur roads to the east lead to faculty housing. The Drescher Graduate Campus is contiguous with and northwest of the central campus. Construction was completed in 2003, and it is now home to the School of Public Policy, the Villa Graziadio Executive Center, and the full-time programs of the Graziadio Business School and the Graduate School of Education and Psychology, as well as housing for students and fakulty. 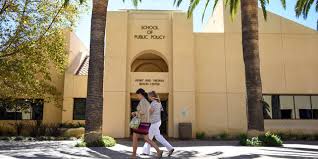 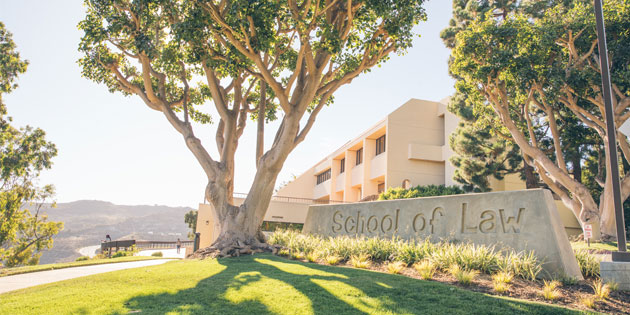 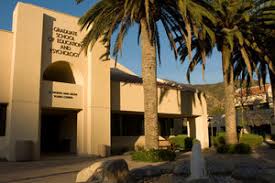 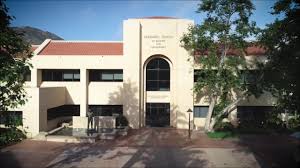 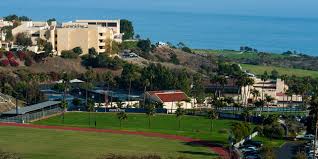